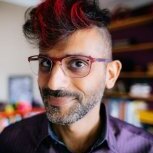 Does ABRP pull data live during a drive from Tesla?

Hi there. I've got a Tesla Model 3 and am on a road trip across the US. ABRP has become invaluable for planning and on the road. I've recently had the misfortune of almost getting stranded after installing a roof rack and giving friends a ride with their bikes to a week long bike ride one state over. I didn't realize how much wind resistance would drastically turn up consumption (mostly I just did the math for the extra weight).

The way I understand it is that as I had ABRP grabbing live data from the car, it knew what the energy consumption average was for the ride prior (before I picked up my friends and loaded up my roof with bikes) which was around 280 Wh/mi. After I got about an hour past the first supercharger I realized our consumption had shot up to 360-380 Wh/mi and wouldn't make it to the next charger (fortunately there was one last level 2 charger along the way that we stopped at for an hour to get just enough juice to get to the next supercharger). I spent that hour trying to figure out what I did wrong and found this page which dropped me into the "duh, of course" moment realizing there's wind resistance to think about. I set the consumption in ABRP to a conservative 400 Wh/mi and was able to make it to our destination (about 2 hours late).

My question is does ABRP read the average energy consumption only when the route is calculated, or should it also grab new live data during the drive and potentially complain if it realizes consumption has gone and and you won't make it to the next charger?

0 answers to this question