Thanks to the 4 Ioniq EV drivers contributing driving data to ABRP, we’ve finally got enough data points to define our first real world consumption curve for the Ioniq EV!  We can still use driving data to improve the model even further, so if you’d like to contribute your data, have a look at the instructions.  Also, if you’ve got an electric car you’d like us to support have a look at our post detailing How to Add Your Car to ABRP.

Much of the data comes from day-to-day driving, with a few road trips sprinkled.  Thanks to everyone who contributed their driving data!

The ABRP Model, as you know, is driven by calculating the power consumed for each leg of the trip by plugging in the speed, elevation, and other factors for each segment of the trip, determining how much power the car must output to drive that segment.  It then adds up all the segments, and subtracts it from the battery to determine when a charging stop is needed.

For this purpose, we need an accurate driving model on flat ground as a baseline, that turns speeds into power.  Then we can add all the other driving factors on top of that: 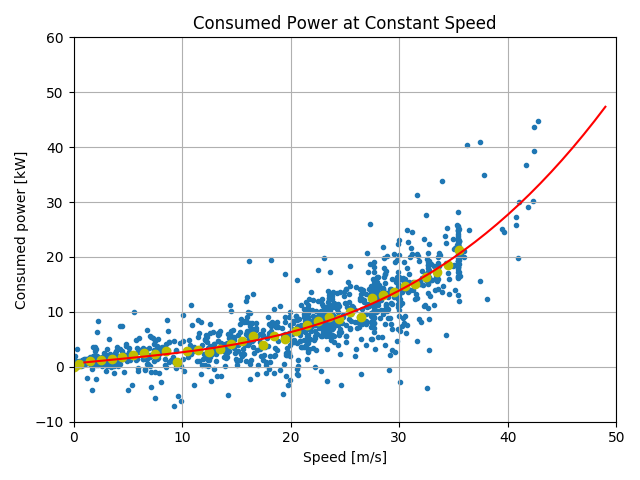 The blue dots are consumption samples (30 seconds of driving), adjusted for elevation and speed changes, and the yellow dots are median points within a 1 m/s bin. This means that the red line consumption model is fitted to the median consumption which means that most weather issues, car defects, aggressive driving and so on is typically ignored. As can be seen, we mostly have data points from very low speed and from highway speeds, but that is where things are most interesting.

For the Ioniq EV, Hyundai has done a decent job with their aerodynamics, but the big gains come from its small cross-sectional area and low weight.  Giving it a reference consumption of only:

That’s even lower than the Model 3 (143 Wh/km), which is extremely efficient!  The Model 3 has a similar Coefficient of Drag (Cd TM3 = 0.23, Cd Ioniq = 0.24), but a higher cross-sectional area, which increases the overall drag on the car.  Weight has less of an impact on range, mainly at lower speeds.  At higher speeds, drag is king.

We’ve now updated the live model for the Ioniq and removed the “Beta” tag, so you should see the benefits of this higher efficiency in your route planning!  Do note that we still set the default a little lower than this measured value, just to ensure we give you a plan that’s not going to over-promise your car’s capabilities.  If you know how well your car drives, feel free to re-adjust back to this value!

Comparing to the Analytical Model 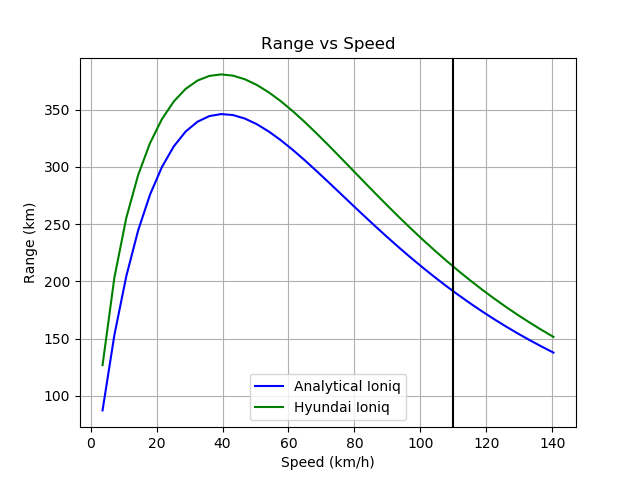 Up to this point, we’ve been using an analytical model, and similar to the Bolt analysis, we see a pretty close fit between the two.  Accounting for our standard 10% margin, it’s a pretty solid model!

Road Tripping in the Ioniq

Given how efficient the Ioniq is, and how quickly it can charge, it might do quite well on a road trip, even given its low range.  You’d have to stop regularly to charge, but it might not require as long of a stop. The problem is, that the Ioniq cannot make our standard road trip model. (1000km at 120km/h with 200km legs). Its range is too short.   However, shortening the leg distance gives it:

With this adjustment, the road trip requires 8 charging stops, and you’re stopping almost every hour.  Given the number of stops, adding “fiddling with the charger” time to that will make your road trip longer, so 10:40 might be an overly optimistic number.

Finally, comparing on the charging speed, we get:

Looking at the charge speeds this way, we see an interesting side effect of the small-but-efficient path, as well as an up-side of the more “hockey-stick” shaped charge curves a lot of manufacturers are using in upcoming vehicles.  Because the Ioniq is so efficient, it gets a very high relative charge speed, even though it’s actually charging only slightly faster than the Bolt measured by kW.  The hockey stick really shows itself when comparing against the S60.  Even though it starts out slower, around 50% the Ioniq starts charging faster, and maintains longer than the S60.  This is important for the Ioniq’s small battery, and contributes to its decent road tripping time. 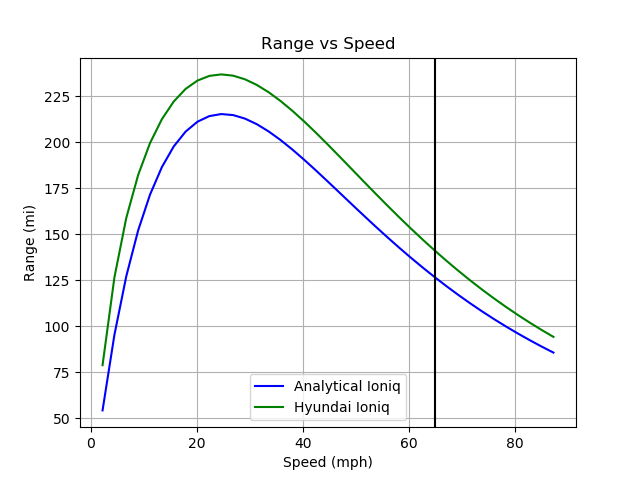 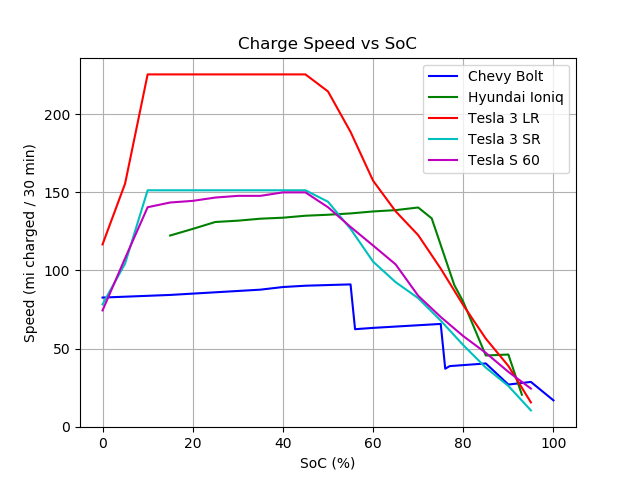 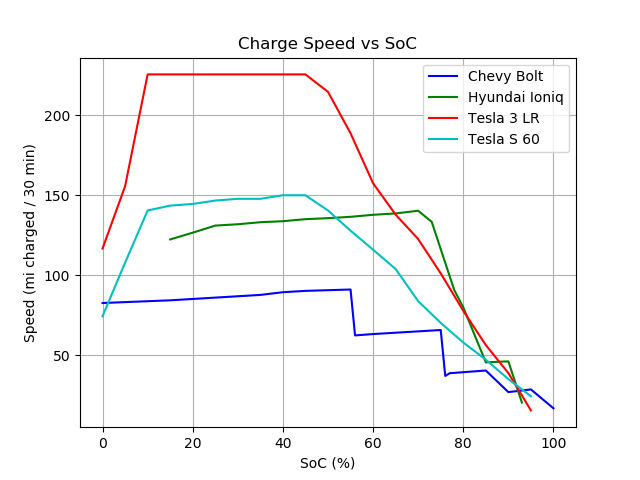