Thanks to all who have contributed data to help improve the planner! Without you, we wouldn't be able to plan routes with such accuracy.  We've finally achieved enough data (and I finally had time to sit down and analyze it!) to produce updated real-world charging models for many of the EVs you've been providing live data.

Before we start, it's important to understand that the baseline curve is a best-case curve which planner limits based on real conditions (like the charger's maximum current output).  In the future we'll be implementing other limitations, such as battery temperature. 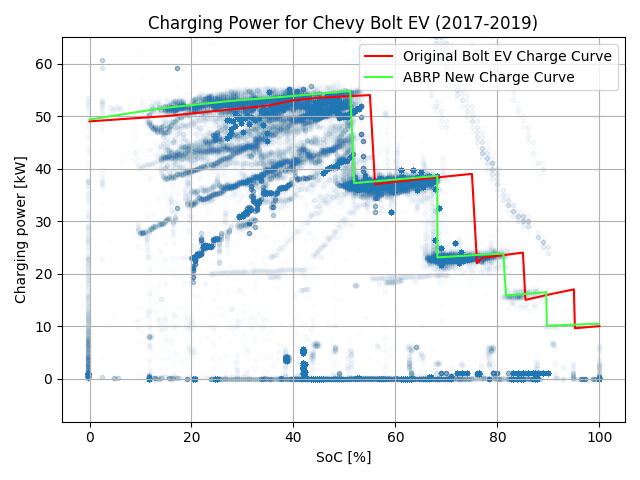 Some really interesting features of this data! To start with, our charge curve for the Bolt has been highly optimistic for some time.  This matches up with my experience when charging.  The next thing I note is the many "warmup" ramps under 50% SoC, these are likely preset cold-battery curves, and I will be revisiting these in the coming months as we work on our cold weather models.  At the moment, our charging model is relatively naive, assuming a single curve for all conditions.  It also seems like the step-downs also vary depending on condition, but generally are within the same several percent of each other.

Next we've got the Hyundai Ioniq (28kWh): 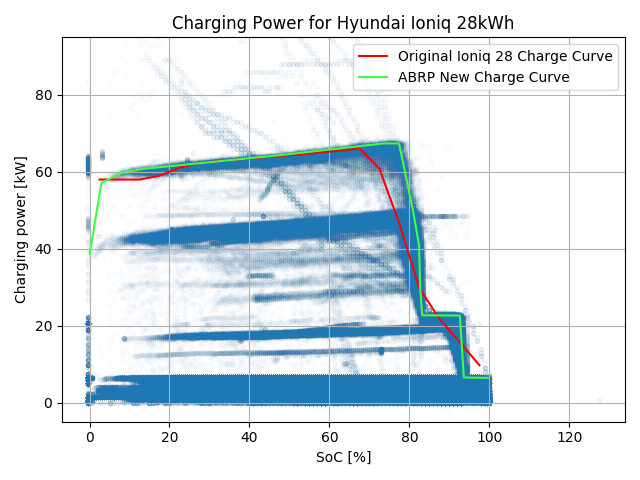 In this case, our original estimate was a little pessimistic.  Tapering too early and too harshly.  The actual performance is quite impressive.  Maintaining full charge over 60kW all the way to nearly 80%!  The middle "shelf" in the curve corresponds to the max power on a 50kW charger, limited only by the battery voltage and the charger output current.  The final feature that's quite apparent is the 94% DCFC cutoff (The line is extended to 100% along the L2 power level).

Next for an interesting chart is the Hyundai Kona / Kia Niro / Kia Soul (64kWh): 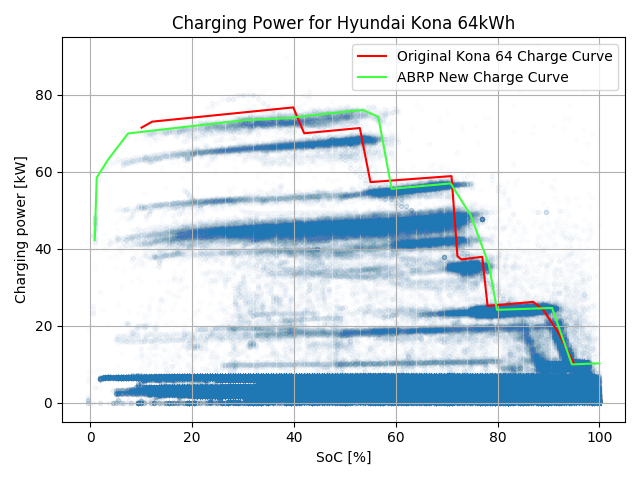 All three vehicles share a powertrain, though we only had enough data from the Kona to produce a charge curve.  We'll be applying this charge curve to all three models.  The chart has some interesting characteristics.  First, there's a lot of "shelves" in the chart, where either the car is throttling itself by requesting a lower amperage.  This is likely due to colder batteries, but interesting that there seem to be preset levels that don't change as charging warms the car.

Finally, and longest coming, we've finally got enough of the right kind of data from the Nissan Leaf to produce full driving and charging models!  This post will only focus on the charging models, I may post an analysis of the Leaf driving when I have some more time in the future, but those models have all been updated. 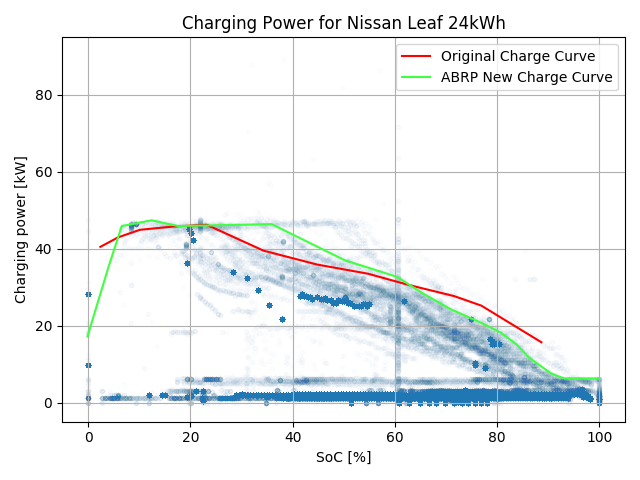 Some interesting features here, there seems to be a lot of variability in the charge rates on the Leaf, different taper points, and taper rates.  This suggests some realtime optimization by the battery management, and likely some compensation for degradation on the battery.  As I have time to dig into building out more detailed charging models this will be an interesting avenue of analysis! 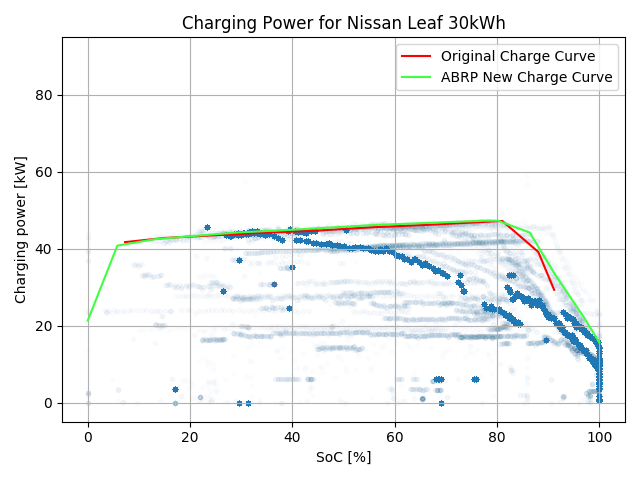 Our original estimates were pretty close to the bounding max power curve, though as those who own a Leaf can probably attest, it seems that often it follows a more limited power curve.  Again, likely managed by the BMS and limited by conditions. 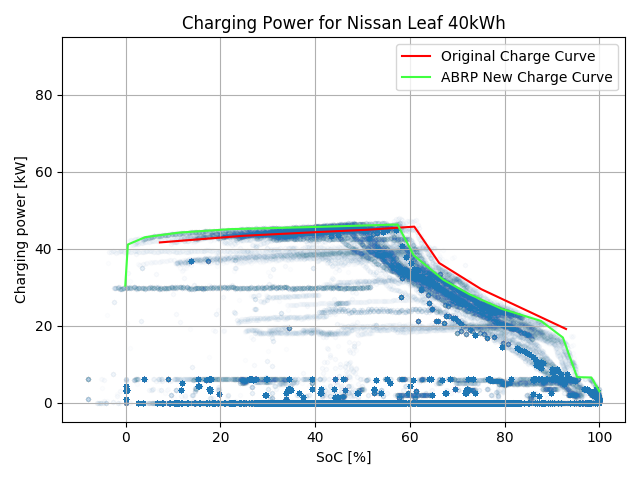 At the moment we only have Leaf e+ 50kW charging data, since very few are in the wild and even fewer >50kW Chademo stations are available yet.  Once that data is available we'll make a separate post for that (and other cars which are ready for updates.

Hope you've found this data interesting, and more importantly - use it to plan some exciting trips!