Since we last wrote about Tesla supercharging, Tesla vehicles have received quite a few software updates (as usual). Some seem to have modified the charge curves of some car models, and especially the classic Model S 85 owners have been noticing some relatively big decreases in charging power.

As usual, we at ABRP have actual data thanks to our generous users who contribute it by logging in with their MyTesla account in ABRP and checking "Share data" (and even "36h Background sharing") for us. This is all thanks to you!

So, without further ado, let's dive into plots.

The plot below shows charging data for BT85 from May 2019 through August 2019. The blue dots shows all samples collected by ABRP during supercharging for those vehicles, and the red curve shows the ABRP charging model for S85 based on data up to May 2019. As you can see, it still seems to model good charging performance pretty well. 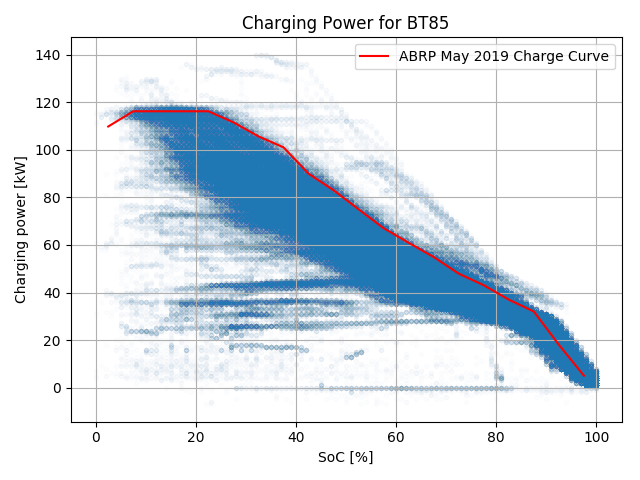 However, somewhere in June, the charging speed was changed after a SW update. The new charging data, now only from July-August is substantially different: 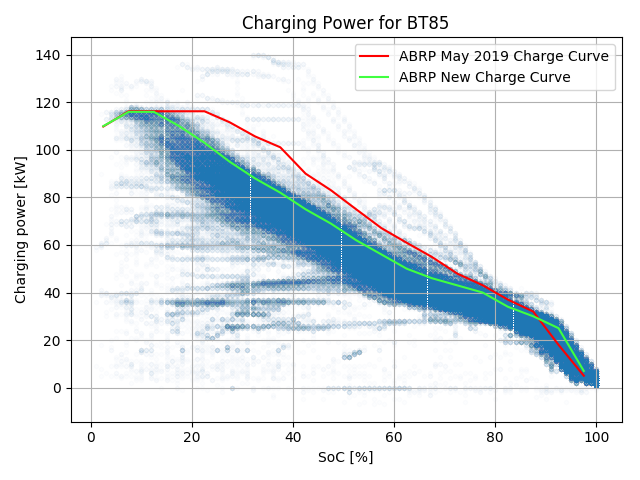 The red curve is the same as above, and the additional green curve now models the new behavior based on the new data. Obviously, the charging power drops much earlier at lower SoC (battery %), which leads to a slower typical charge sessions.

Our standard charging benchmark from 10 kWh to 50 kWh has changed from 29 minutes (May) to 34 minutes (August) for the BT37. No disaster, but also not so fun for S85 owners. 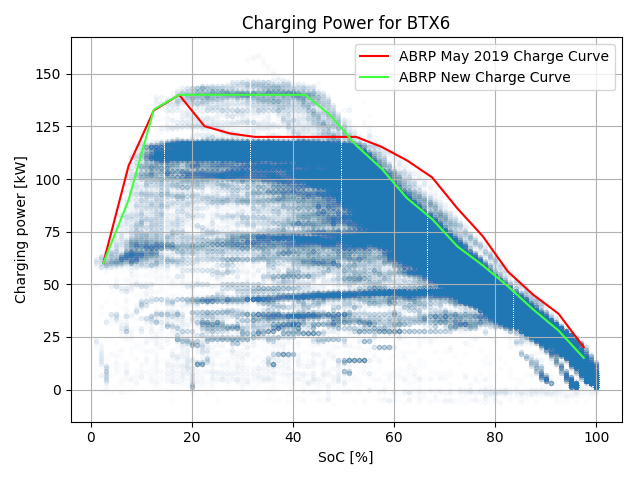 When we last updated the BTX6 battery model, after the spring Supercharging power increase, we noted that while peak power was indeed increased to 140 kW, it usually quickly dropped down to 120 kW, probably due to thermal issues. Now, while most data is from Superchargers with only 120 kW capacity, there are quite a few sessions where charging power is sustained at 140 kW. Good news for 100D owners!

The not-so-fantastic "90" kWh battery (actually 82) has also been slightly modified, with most sessions seemingly limited to 120 kW. We have updated the ABRP model accordingly. 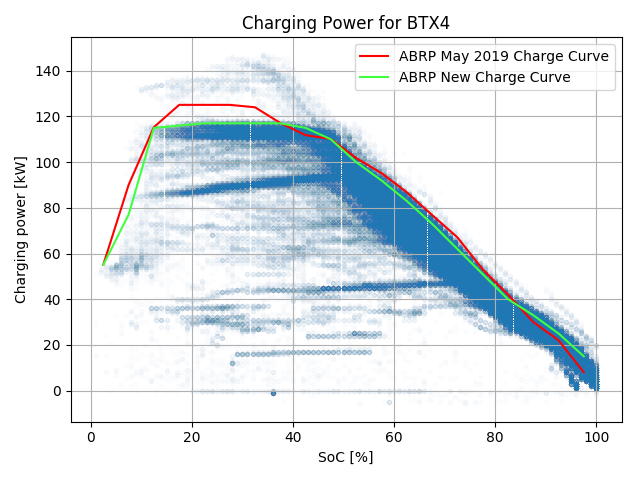 Note that there seems to be a collection of sessions which peak at about 94 kW, this may be the infamous charging power limited vehicles which have Supercharged "too much". 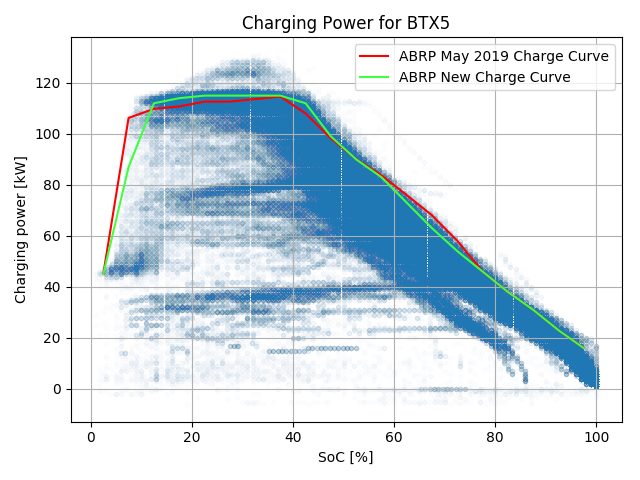 Only minor changes can be seen in the charging curve for the BTX5 battery and we have updated ABRP accordingly. 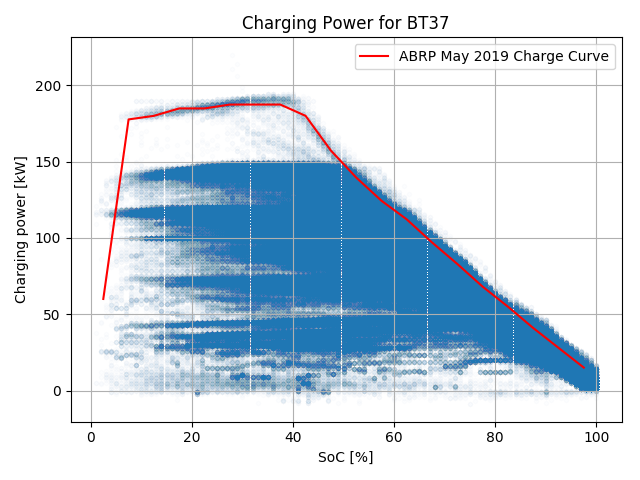 The fast-charging Model 3 Long Range battery does thankfully not seem to have changed at all! The curves show the fast 190 kW charging for users at Ionity HPC stations, and then up to 150 kW charging at fast Tesla Superchargers.

ABRP is starting to have a get a fair amount of data from Model 3 Standard Range Plus cars, which means we can also show a new charge curve for this one. It seems like Tesla has decided to put a hard cap on peak power at 100 kW for the SR+, at the same time extending the region with high power charging further. Since the SR+ battery capacity is rather small, this means that often supercharging is actually faster with the new curve - good news! 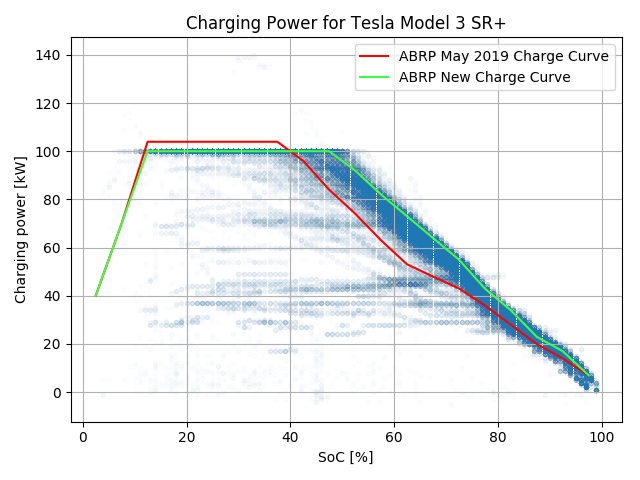 Similar to the BT85, the BT70 has received reduced charging speed. We don't have tremendous amounts of BT70 data, but it is still enough for us to see a clear change. New model is released in ABRP.. 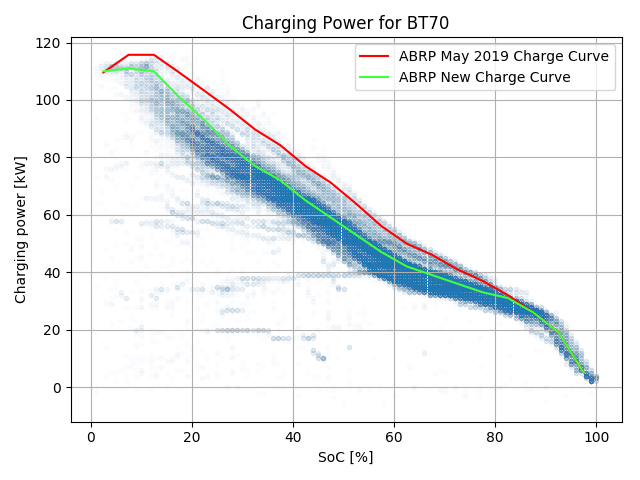 As usual, ABRP is building our car charging and consumption models on real-world data. Thanks to our fantastic users who donate data, we can continuously update those models, and we try to publish our findings here to give back to those who donated!